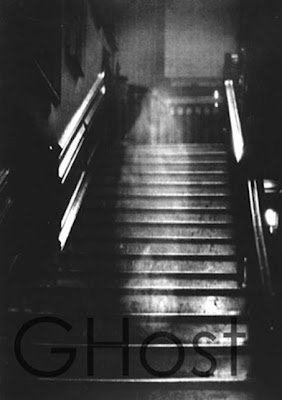 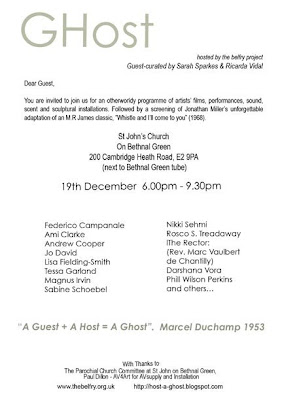 In 1953 Marcel Duchamp made an artwork titled “A Guest + A Host = A Ghost”. The mysterious phrase was inscribed on the tinfoil wrappers of sweets that were handed out during an opening in Paris.
Etymologically “guest” and “host” go back to the same roots. The Middle English (h)oste meant both “guest” and “host”. It also meant “stranger, alien” and it is only a small step from there to “ghost”, to the disembodied spirit, the shadowy or evanescent form wandering among the living like an uninvited guest.
For this show we take Duchamp’s calculation literally: with the belfry project in the role of Host, and artist/curator Sarah Sparkes and curator Ricarda Vidal in the role of Guests, we have put together a night of Ghosts. Continuing the Christmas tradition of telling ghost stories on the long dark winter nights, and in the footsteps of Charles Dickens, M.R. James and the BBC, this will be a night of spooky yarns to warm you up on a chilly winter evening.
The show will spread over the whole of St John’s Church, spilling from the cobwebbed dark alcoves of the belfry into the entrance hall, past the red velvet curtains and into the church. There will be performances, video, sound and scent installations, and sculptures in the foyer and the belfry. The church itself will open its doors later in the evening, when we will screen a programme of artist films followed by Jonathan Miller’s “Whistle and I’ll come to you” (1968), an adaptation of the eponymous M.R. James story.
Mulled wine and mince pies will be served.
NB: There is heating in the church but not in the belfry or the foyer, so bring warm clothes!

Installations in the Belfry and the Foyer

"Anomaly"Jo David, UK, 2008, film, 15 min loop.
The film shows the artist’s encounter with an urban fox one night in spring. The creature’s wild nature is highlighted by the urban setting and its reaction upon sensing the ‘watcher’ is eerie and magical. What follows is an exhibition of behaviour that is challenging, even menacing and yet, there seems to be an underlying longing for some kind of connection between the animal and the human. 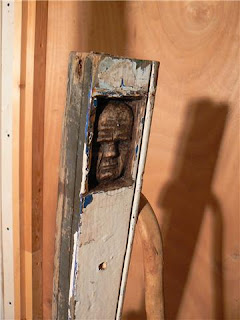 "Stella and George", Andrew Cooper, UK, 2008, film, installation inc. two hand-carved wooden TVs showing two parts of an animation (5 min loop); the third part will be shown inside the church.Andrew Cooper, UK, 2008
‘Stella and George’ uses stop-motion and hand-drawn animation to create a story about a family memory stored within old domestic furniture. Stella and George emerge from an old piano leg and a door frame respectively and go looking to be re-united with each other. One TV shows the story of Stella, the other the story of George. The hand-carved wooden TVs become containers for the spirits of these lost souls.

"you are here" plywood, lights, trestle tables, Sarah Sparkes, UK, 2006
Sarah Sparkes’s work ‘you are here’ consists of a ply wood coffin, built to fit the artist, and standing on two trestle tables. Through a peep hole, in the foot of the coffin, the viewer has a glimpse of a twinkling tunnel of lights disappearing out of site. 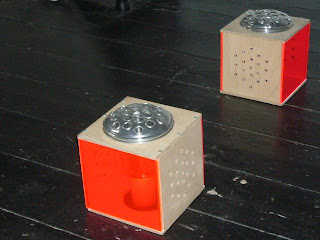 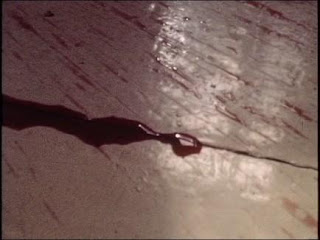 "Lupinen (Lupines)" artist film, 6 minSabine Schöbel, Germany, 2006
The film is shot in an empty apartment where wine bottles fall from a height to shatter on the floor. Wine like blood runs along the floorboards. Through shifting camera angles perspectives become mixed up so that the outside appears to be inside and vice versa, while the red stains slowly retract onto themselves and disappear.

"Chair" installation, artist film, 2 min loopPhill Wilson Perkins, UK, 2008
This strange film focuses on a small wicker chair that moves of its own volition. The chair is made of some ephemeral material that conjures the microscopic look of human tissue and questions the reality the human eye allows us to perceive. 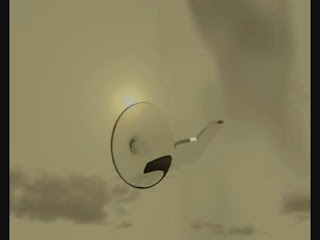 "The Touch that Moves", "They Fly with Us", "The Dance of Waiting", triptych on 3 screens, loop Albert Price, UK, 2008
Price’s triptych is a beautiful and tranquil enquiry into the spirituality of objects. In ‘The touch that moves’ two opposite entities come into contact with each other and create a whirlpool in space. In ‘They Fly with Us’ we look through the window of a plane cruising at high altitude and watch a winged creature follow our flight. The final piece, ‘The Dance of Waiting’, was shot in the belfry of St John’s and offers visitors a rare glimpse of a delicate otherworldly creature that has made the belfry its home and feeds on the sound of bells.

In the Church
"Wind 1", sound installation, Darshana Vora, UK/India, 2003
Inside the church and unseen to everyone a strange musician is playing an unconventional score. As the music seeps through the closed doors of the church the visitors are subjected to a series of ‘subliminal messages’. All the sounds in the piece have been extracted from the ‘spoken texts’ in the Bible, The Bhagwad Gita and the Quran. Each sound is hence a word, relating to the scriptures describing paradise/heaven.
Programme of Screening
starts at 7.30pm 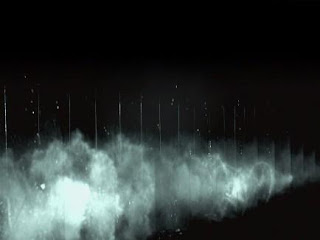 "Kogel Vogel (Bullet Bird)", Dir. Federico Campanale, Netherlands, 2007, 6 min
A bullet is fired through a succession of glass panels in a blacked-out room. The only light is the spark of the bullet which lights up the shards of splintered glass as it passes through each panel. The action is shown at different speeds and from different angles. The only sound is that of splintering glass. A beautiful and eerie film. 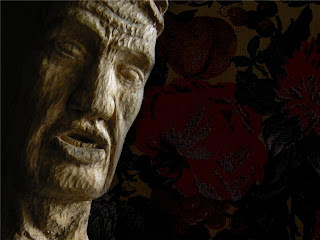 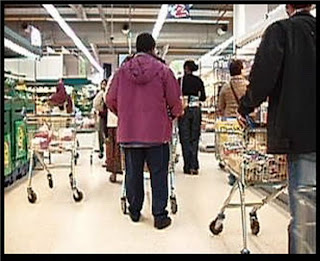 "Zombie", Dir. Tessa Garland, UK, 2008, 3 min
This supermarket horror film is based on George Romero’s 1960’s cult film Night of the Living Dead. In Zombie, an ordinary supermarket becomes a film set, where the shoppers become unsuspecting actors in a short but climatic horror sequence. Zombie was shot on a mobile phone camera which gives the film its style of part surveillance, part disposable and throw-away. 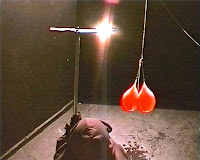 "Desecration" Niki Sehmi, UK, 2008, 3 min
The assailant begins well poised for the act. There is a transformation from total control to the ridiculous and then desperation. The observer is unfortunately encouraging the inevitable rather than offering salvation. 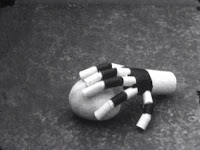 "Flasher" Dir. Magnus Irvin, UK, 2007, 3 min
Find out where Belisha Beacons come from. Behold the transformation of a man into an item of street furniture. See the ferocious, jumping beacon hand wreak vengeance on the callous Mr. Podomowski. Witness the birth of a Belisha Beacon.

"Rorschach and Prozac, a suburban Christmas" Ami Clarke, UK, 2004, 4 min
A humorous take on the perils of suburbia during the Christmas break, taking as its reference the Rorschach inkblot test method of psychological evaluation, and the schlock horror films that navigate the territory between the familiar suburban landscape and the uncanny. Using lo-res footage filmed on Christmas day in the family car driving home, the horror genre cliché of female victim-cum-avenger; brimming with dangerous psychic energy, is sent up in the filmmaker's gaze upon the territory of her adolescence. The soundtrack, taken from Italian auteur Dario Argento’s 1977 horror film ‘Suspiria’ “effects a sense of immersion, a sense of compulsion as opposed to control, drive as opposed to desire.” 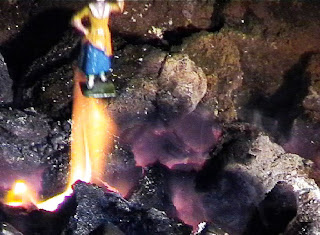 "Necromancer" Lisa Fielding-Smith, UK, 2007, 3 min
The original footage depicts six lead toys: a huntswoman, a land army girl, a milkmaid, a nurse, a lady bowls player and a flower girl. The figures have been burned one after the other in flames (poisonous fumes). The footage is then reversed emulating the figures to resurrect from the embers of fire.

"The Mist on the Water: A spooky puppet ghost story" Dir Richard Mansfield, UK, 2008, 2.30 min Shot in black and white with the eerie voice of an unseen narrator, this film has a charming yet unsettling quality that evokes the spine tinglers of those classic days of the BBC Christmas Ghost story.

"Whistle and I’ll come to you" 42 mins Dir. Jonathan Miller UK 1968
Whistle and I'll Come to You is a splendidly executed tale of the supernatural, a fascinating character study and a genuinely chilling ghost story. It may lack the narrative complexity and big surprise ending of modern cinematic genre outings, or even an explanatory conclusion, but it scores through its central performance, its restrained direction and an increasingly creepy sense of atmosphere.


With Thanks To:
The Parochial Church Council at St Johns on Bethnal Green.
Paul Dillon – AV4Art for AV supply and installation
Jonathan McKay for making the showreel
http://www.sarahsparkes.com/
http://www.thebelfry.org.uk/
http://bettingonshorts.com/pages/en/homepage.php
http://igrs.sas.ac.uk/staff/ricarda-vidal.html
Posted by GHost at 20:17 1 comment: