On June 25th and 26th the Folkestone Triennial 2011 officially opened and GHost was there inviting visitors into our GHost CLHub at the B&B Project Space.  We also took up residence in the Kent Cultural Baton in the Stade.
Here are some photographs from the weekend.

GHost CLHub is a GHost Project for Folkestone Triennial Fringe.  The name is part homage to the real Ghost Club and a play on our name GHost and our hosts name Club Shepway.  The CLHub was constructed by Sarah Sparkes and Ricarda Vidal, from our own hand made wallpaper and  found objects from Folkestone.  It serves as both an exhibition space and investigative headquarters for our research into haunted Shepway. We are currently showing artwork by Miyuki Kasahara, Calum F. Kerr, Domingo Martínez Rosario and Cathy Ward﻿.  More artists will be represented over the three month residency and their work will hang along side a growing archive of  materials sourced, lent or donated form Shepway residents and which reference paranormal themes.
﻿


“The Eternal Tide” Cathy Ward, 2006/11
salt-encrusted objects, film
On a cold, bleak, winters day a 7 year old child was out rock hunting in the outer limits of no-mans-land left by the retreated tide. She discovered buried treasure under the stones, a mass of silverware, medallions, jewellery and brass. The treasure trove was handed over by the child. It was discovered that it was stolen from an antique shop in Tontine Street, but the child received no acknowledged for the find.
The true story is retold as part memory, part fiction, blended with nostalgia and a melancholic soundtrack that harkens back to that decade. Featuring her elderly mother in the present day, with images of the artist and parents from 1967, the year this event occurred in Folkestone. The event was restaged 40 years after the discovery in 2006.  The objects used then stood for years corroding, decomposing & reforming salt crystals, a process of being reclaimed by the sea.

Un-titled, Domingo Martínez, 2011
found photographs, found objects
Domingo Martínez is a visual artist currently studying for his PhD at the Polytechnic University of Valencia, Spain. Both his artworks and research project deal with memory in contemporary art, taking anonymous found objects (photographs, videos, dolls, furniture, etc.) as the starting point to build up the artwork. By means of manipulating and modifying those objects, he reaches issues on a conceptual level in which we can argue about the role of memory as a construction within the present, that has a direct influence on the conception of ourselves, our identity and the world we live in. In the photographs and objects for the project GHost CLHub in the Folkestone Triennial, he shows the memories and recollections of a place, not only by using old photographs and objects, but for the presence of other beings in them, other souls that lived in the same place and that appear as silhouettes and ghosts.
“Se Ga Ki (Hungry Ghost)” Miyuki Kasahara, 2009
Sculpture and Found objects
Miyuki’s ‘hungry ghost’ was part of a series of ghosts she made for a performance at GHost II in St John on Bethnal Green, London, in 2009. At the exhibition she gave away boxes containing ‘hungry ghosts’ asking the recipients to sign a promise to look after the ghosts and take them home to feed them well. The result can be seen on http://segaki.blogspot.com/

The last hungry ghost is now unliving at the B&B Project Space - please visit it and feed it to keep it from haunting the space.

“Alan Hazzard's Re-readings from the Necronomicon” Calum F. Kerr, 2009/11
Mixed Media (Digital Film, Screen, Headphones / The Necronomicon, Chain, Dark Cloth, Padlock),
In an illuminated basement on 26th July 2009 Alan Hazzard read from the Necronomicon. He had recently acquired it from a professor in Leipzig. Oh to re-live this sombre reverie!
With live sound from Death to the King (Kevin Quigley) and camerawork by Miyuki Kasahara.


On Sunday 26th  GHost CLHub was in residence in the Kent Cultural Baton where were new memebers were intitiated, ghost stories collected and recorded.  Inside the Baton, visitors could watch films from the GHost archives and find out more about the project. 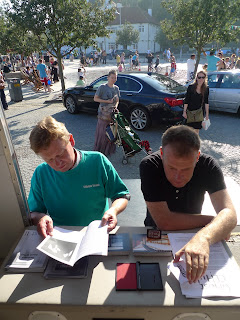 Posted by Sarah Sparkes at 18:48 No comments: