GHost presents the second in a new series of Hostings – 'GHost-dance' – exploring the idea of ghosts as cultural and political movement. 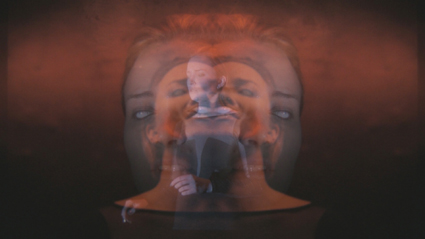 Gen Doy,  Song for the Deaf and Blind 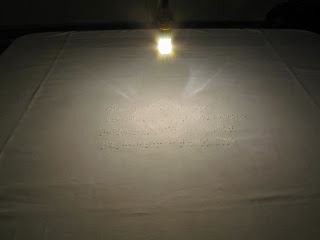 Song for the Deaf and Blind was first performed in early 2013 at the Huguenot Cemetery in Wandsworth Town, south London, where it was recorded for an installation. This performance develops some key themes of Gen Doy’s work….the attempt to bear witness to, and to remember, people subjected to injustice and violence by forces of the state, the importance of history and those marginalised by mainstream historical narratives, the power of site-specific commemorative acts and the ways in which the past returns not as nostalgia, but to come into collision with the present.


Gen Doy was a lecturer and researcher for many years at De Montfort University before taking early retirement to develop her art practice. She lives in London, and has two grown-up sons. Her works have been exhibited, installed, and broadcast on radio.


Gen works with written and spoken texts, field-recordings, still and moving images, and performance, to construct narratives that are not linear, but suggestive and open to creative interpretation by the listener/viewer. The voice has become important in her work, as she exploits its sensual and seductive potential, to bring to light and sound people and events hidden or forgotten. The words of people from the past, and emotions from barely smouldering embers, pass through the flesh of her body and live again in her voiced breath. Her aim is to make poetic art with “guts”.
http://www.gendoy.com

Christian Weaver,  Trillando en el cajón: mediating positive and negative forces in the realm of the dead through music and dance. 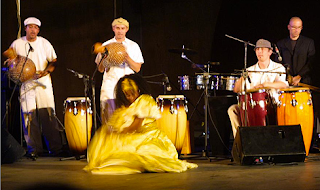 In the 21st century Cuban capital, Havana, and throughout much of the island, communities of diverse and mixed origins dance with the ghosts of their ancestors on a daily basis. The ceremony known variously as ‘cajón pa’ los murtos’, ‘cajón espiritual’, ‘cajón pa’egun’, or simply ‘un cajón’ makes use of espiritist techniques, along with sentimental, spiritual and ritual elements of various religions to extract useful advice, guidance and cleansing from ancestor spirits. The ‘cajón espiritual’ has its roots among Cuba’s marginalised and disposed who sought reassurance and support from both their direct ancestors and various international ancestor spirits who’s repute or power made them attractive as guides. The tools they chose were simply those at hand, and whose efficacy was already established to them. Not the least of these being drumming (in this case on wooden boxes, from where the ceremony derives its name, cajón), singing and dancing, as participatory acts. Although the cajón includes potent elements and symbols taken from a range of influences (including Lukumí, and Native American), the principal elements are derived from Catholic and Congo religious practices, and to a lesser, but still important, extent, Kardecism. The process through which these forces are meditated and usefulness extracted, is known as trillando (from the Spanish verb trillar, to thresh). Powerful religious and spiritual fragments are threshed together within the ritually controlled environment of the cajón in order that the beneficial can be separated from the unavoidable (and balancing) negative. This paper examines the central role of music and dance in the process of trillando, how social cohesion is encouraged through participation in these activities, and the relationship with the dead enacted in order that social usefulness is extracted and exploited by the community.

As an initiated drummer, Christian Weaver regularly performs ritual music for ceremonies in Havana. He has researched the music and dance of Afro-Cuban religions, and the vernacular music of Cuba’s urban poor, since 1994. He was awarded his PhD in Ethnomuiscology in 2010.
http://www.latimbala.com/ 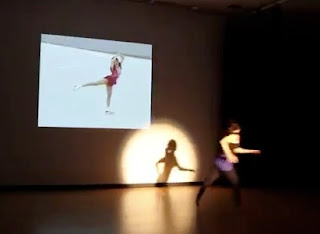 I studied and performed the Butoh dance form in Japan for three years. Butoh emerged after WW2 and sought to embody ancestors, ghosts and darker aspects of the psyche. In this piece I draw from Butoh's use of possession and exploration of the unconscious.
'Skating' is a dance/ theatre piece about embodying histories, searching for identity and failure.
The piece begins with looking for a role model as a Japanese American young girl and being unable to find one. Then while watching the Olympics with my grandparents, who are from Japan, I discovered the Olympic ice skater Kristy Yamaguchi. Afterwards I began ice-skating. Throughout the piece I speak of my family's history, that of my grandmother growing up in Japan during WW2 and my grandfather being Japanese in the USA army. My grandfather was in the USA occupational forces in Japan and his fellow soldiers were in internment camps during the war in the states.
While imitating Kristy Yamaguchi through movement, projected footage of the ice-skater herself is intersected with film of the USA occupation of Japan.
I fall repeatedly, failing to achieve an ideal Japanese American identity and also struggling to shed my family histories. The dance is how my body holds the painful histories of my ancestries - ghosts of war and assimilation.
­'Skating' explores the intersection of personal history to cultural history. The piece begins with humour and story telling and builds to a dance where my ancestors ghosts ate channeled and exorcised.
Mitsu Salmon is currently a MFA student in performance at the School for the Art Institute in Chicago. She creates original performance and visual works, which fuse multiple disciplines and cultures. She was born in Los Angeles, California and studied experimental theatre and painting at NYU. She has lived and created work in India, England, Germany, Amsterdam, Japan and Bali. She has presented at places such as Performance Space 122, Dance Theatre Workshop, Highways Performance Space, Links Hall, the Berlin Performance Art Festival and the London Performance Art Festival.
www.mitsusalmon.com 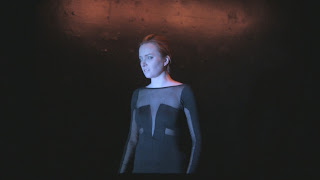 "There is a strong sense of Romanticism in my practice, mainly in the roles which sound, performance and expanded cinema has in tackling the themes of metaphysics and science fiction. BLACKCAT is a performance of an appropriated and fragmented version of Bowie’s Cat People by means of a vocal processor. The starting point of this is from its esoteric femininity to create BLACKCAT as a visual presentation of channeling vocals and cosmic noise as form, presented as a dispersed engagement between myself as ‘blind ‘ ethereal performer and you as a viewer. I wear theatrical white blind contacts to erase my sight. Blinded and struck for a moment, this ‘illuminated singer’ no longer discerns the limits of the room. I become at once trapped in the point of darkness and light."
Michelle Hannah is a Glasgow based artist born in Alexandria, Scotland and a graduate from the Master of Fine Art course at Glasgow School of Art. Selected exhibitions/performances/screenings include NGCA, Modern Edinburgh Film School, CGP London, Whitely Arts Festival, University of London, Vetlanda Museum, Glasgow Project Rooms, Gi 2012, Dresden Film Festival, CCA, Generator Projects, Embassy Gallery and is now the curator of a performance and video based event under the theme and title 'NITEFLIGHTS' which will appear throughout Glasgow.
michellehannah.org

"Our dead are woven into our souls
like the hypnotic music of bone flutes:
we can never escape them."
Albert Wendt 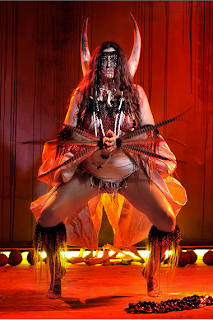 This SEAnce is a participatory presentation, inviting those gathered to experience a core concept informing the SaVAge K'Lub's creativity: even the long-dead are nearby. A performance will occur (a word used in its widest and least defined sense). The deeds enacted will aid those present to call upon potentials immanent in their human being, in their genetic material. Ancestry will be addressed as a vital force, a sustaining resource.
Albert Refiti (Samoan visual arts scholar), writing of an earlier K'Lub event in Canada, states that Raymond refuses to relegate ancestors to a mythical past, and addresses them as available and present, located within one’s body. Raymond, says Refiti, embraces the tensions of tradition and contemporaneity prominent in—but not limited to—cross-cultural artwork. The K'Lub site their presentation at the intersection of polarised values, seeking relationship between cosmopolitan and village-centric values, engaging with the spectral phantom of sameness and the haunting substance of difference.
In the SEAnce, the K'Lub will elaborate on Polynesian protocols of meeting and invocation to invite attendees to establish a position between the Earth Mother and the Sky Father. Through simple communal movement and vocalisation, these elemental ancestors will be evoked. Subsequent deeds will seek out connections to ancestral Mountains, Rivers, Lands, Houses and Forebears. Here the collective may begin to individuate. Multiple perspectives will be entertained. 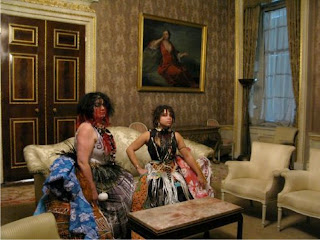 For some gathered, it is possible that a deep sense of ancestry may be contacted. At the same time, it might be that the nostalgia, Romanticism, and exotica are indulged. And what of lineages beyond bloodlines? The cross-currents created by cultural adoption and appropriation will be supported. The K'Lub does not guard against the disruption of categories—authentic and original meets fictive and faux. Mindful of the layered significance of the Ghost Dance proper, the SEAnce will ask not whose the ancestor is, but what this ancestor can do for the emancipation of all.
The SaVage K'Lub is a London-based interdisciplinary collective of artists and scholars led by Raymond. The group explores: the relationships between experiences of difference and belonging; complex intercultural affiliations; continuations of native and migratory narratives; things eclipsed by the fray of dominant communities' interactions. The K'Lub has a special interest in the combination of careful craft in all disciplines (including the continuation of traditional skills) with the vitality of parody, satire and hybridity to delight and motivate, producing art which communicates social commentary and proposes departures toward new philosophies. 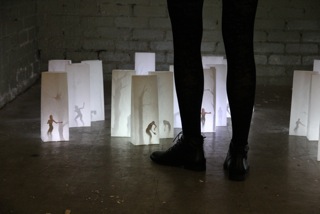 Jennie Fagerstrom brings intimate lanterns to light the loss of way and figures of the non existence to cause erasure of the real. Images referencing the female skogsrå of nordic mythology, seductively luring men to their doom in the lost depth of the forest.
Born in Sweden, lives and works in London.
Studied Fine Art at Central Saint Martin's College of Art & Design, London. 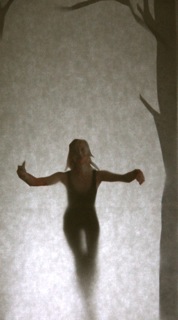 She uses the body and movement as a means of inspiration and expression to create sequences. Translating her ideas onto the fragile nature of paper, supported by low tech and light. Her work touches on the notion of romanticism and nostalgia.
Recent showings and exhibitions-
St Leonards Church LCV event March 2013 " Follow the Lanterns. The Sea and I EP launch with London Contemporary Voices"
Stroud SITE Festival 2012 May, group exhibit "Golden is Silence"
Studio 23 Netil House London June 2012
Coming soon-
Clerkenwell Design Week London May 2013
Performance and installation night Stockholm, Sweden 25 May 2013