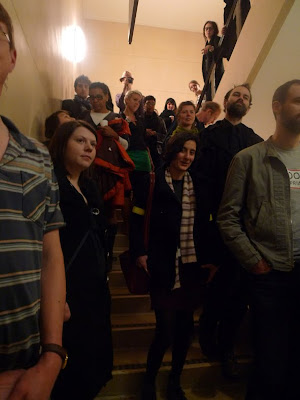 
Another evening of performance, talks and discussions and another chance to summon the ghost of the blue lady from her hiding place in the Senate Room. November's hosting explored the sounds and noises peculiar to ghosts and their kind.


Elena Kamilari, ‘Ghosts on Radio, a Ghost-Medium’, talk and audio 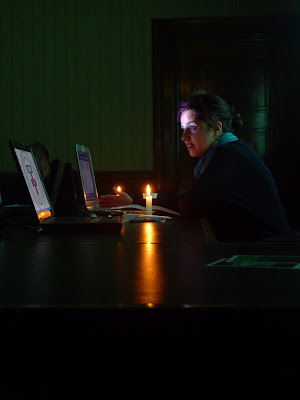 Elena Kamilari and ghost voices
The paper deals with the way radio, an invisible medium, a “ghost”, implies a presence. I will examine, the way the lack of visual dimension in radio is connected with the intangible essence of ghosts, as they both invite us to use our imagination, in order to create a mental image. I will focus on the strategies that radio play directors use, in order to evoke images of persons, places or actions. In the second part of the paper I will focus on the examples of the radio adaptations of Hamlet and Macbeth and I will examine the way radio signs and codes signify the appearance of the ghosts of Hamlet and Banquo. 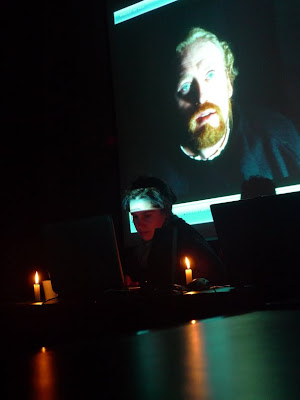 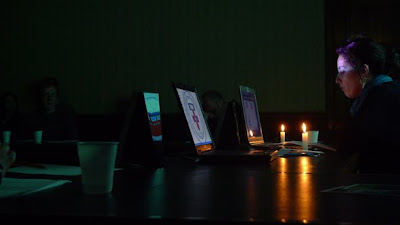 
Fabrizio Manco, ‘A GHOST is another PHANTOM?’ performance and talk

A GHOST is another PHANTOM? is a live art work in relation to the sound of spaces and a reflection on acoustic phantom perception (and its phantasmagoria) informed by Fabrizio’s experience of chronic tinnitus. The ‘phantom-ghost’ will engage the audience in an initial pedestrian itinerant action through the corridors and rooms of the building. Later they will be asked to write down their phantom and a ghost sound on a piece of paper in envelopes given by the artist at the beginning of the performance. This will be read at the conclusion as part of his talk. The audience is particularly invited to engage and ‘prick up their ears’ and actively listen to the spaces and acoustic changes (and temperatures) of the building. N.B.: This performance requires participants to walk up and down several stairs in search of the hidden noises of Senate House. 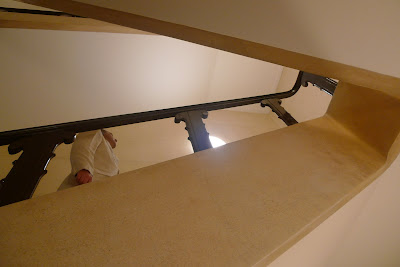 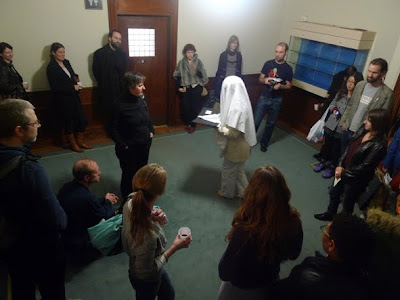 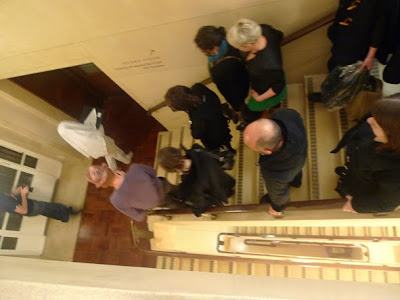 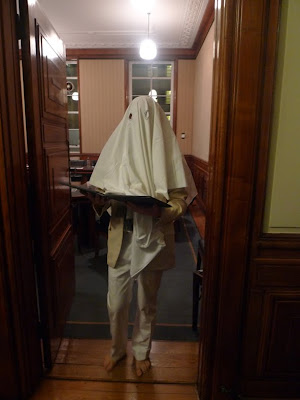 'Linked' re-inserts the stories of the area devastated by the building of the m11 link road, into the space that had forgotten them, through eight-minute audio soundscapes, which audience members pick up via radio receivers. Through the use of images and Miller’s soundscapes, I will take the audience on an incorporeal walk along the route. By exploring my experiences of the walk, I ask if this kind of art has the ability to invoke landscapes from spectral voices, how does it do it on a surface, like a road, that appears to be resistant to the ghosts? 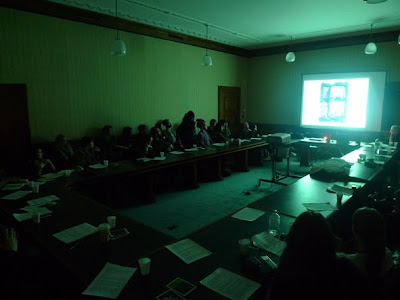 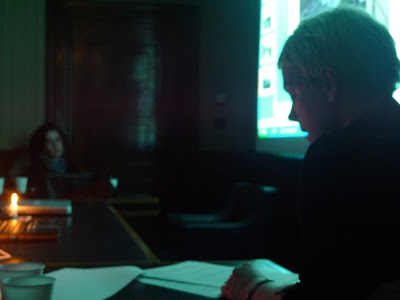 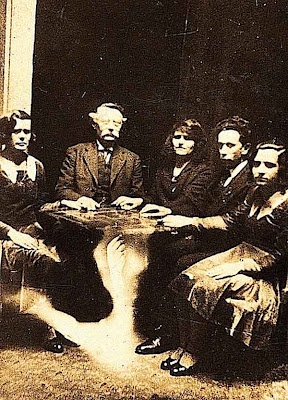 Kirsten Marie Raahauge and Ivar Tønsberg, ‘Contextual Autism’, talk and art presentation
This project deals with the notion of ghost from an anthropological and an artistic angle. The contextual autism of ghosting reveals itself as a sensation of in-betweeness in art as well as in everyday life. As a non-present presence the ghost flavours its host with ghastly sensations of something dim, vague, and indifferently deadpan. The artistic approach is trying to catch the poetics of ghosts, while the anthropologist is questioning haunted people about their real experiences of the unreal in haunted houses. The one haunts the other. 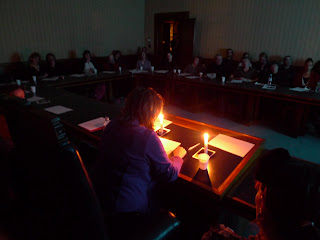 Kirsten Marie Raahauge re-tells the stories of the haunted 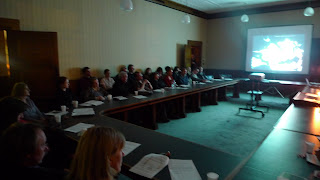 Magnus Irvin, ’The Deadman Talks’, performance
Living people rarely have the opportunity to communicate properly with the dead. We can seek out the guidance of spiritualists and mediums but all of these, both genuine and spurious are but secondary messengers. In the company of a Dead Man talking we are given a fascinating, first hand insight into the ways of death and an opportunity to share the concerns of a corpse that has not completely given up on life. His stories from beyond the grave raise the arcane issues of mind-numbing silence, fundamental human urges, senseless desecration and ornamental lakes. Many of us can spend our whole life without acknowledging the existence of the dead or even meeting a real dead person. Here is an opportunity.Warning to parents and minders: The Deadman’s views are frankly expressed. The feint-hearted and weak of spirit should be aware that he has been dead for a long time and doesn’t give a damn about social decorum. 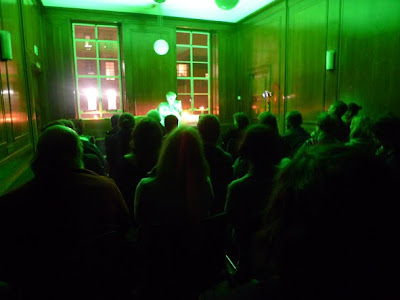 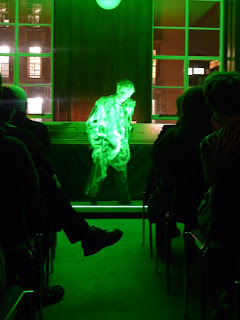 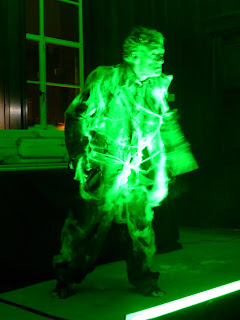 Stéphanie Sauget, ‘Haunted Houses with or without Ghosts?’, talk
Most of the time, in the ghost stories of the Nineteenth Century, ghosts and haunted houses seem to be linked and connected, even in the parody of the genre. But this "obvious" link between haunted places and ghostly creatures is not that clear in spiritualist press articles or in the supposed "real" cases studied by the SPR (Society for Psychical Research) or other scientists. In fact, it seems that the definition of "what a ghost is" changed a lot between 1750 and 1950, both in Europe and in the United Stated. 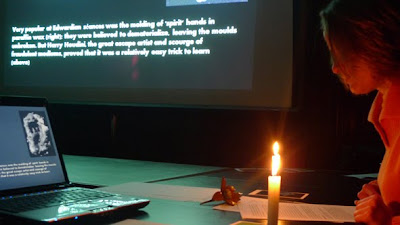 Stéphanie Sauget - with ghost
Posted by GHost at 14:15 1 comment: