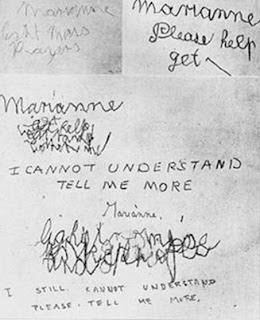 GHost is led by Sarah Sparkes and Ricarda Vidal
Institute of Germanic & Romance Studies, Stewart House, 32 Russell Square, London WC1B 5DN
Deadline for submissions of proposals: 12 July 2010
Date for Hosting 3: 12 October 2010
Date for Hosting 4: 16 November 2010
Venue: The Courtroom, Senate House South Block, Malet Street, London WC1E 7HU
"HAUNTED HOUSE: Responsible persons of leisure and intelligence, intrepid, critical, and unbiased, are invited to join rota of observers in a years night and day investigation of alleged haunted house in Home counties. Printed Instructions supplied. Scientific training or ability to operate simple instruments an advantage. House situated in lonely hamlet, so own car is essential. Write Box H.989, The Times, E.C.4"
This ad appeared on 25 May 1937 in The Times. It was posted by Harry Price, an early-20th-century ghost-hunter who was looking for fellow researchers to investigate the paranormal activities in Borley Rectory, allegedly Britain’s ‘most haunted house’. Price was a member of the Ghost Club and the Magic Circle and avid collector of magical artefacts and literature on the paranormal and occult. He visited and researched ‘haunted houses’ all over Britain and Europe and documented the presence of ghosts and other inexplicable phenomena. He was also the first person to broadcast live from a ‘haunted house’ and is usually referred to as ‘the original ghost hunter’.
While it is unlikely that a similar ad would be taken seriously by most readers of The Times these days, TV-shows such as ‘Britain’s Most Haunted’, or cinema films like The Blair Witch Project (1999) or Paranormal Activity (2010) as well as the abundance of websites dedicated to the paranormal attest to the continuing interest in the field. In some sense ghost-hunting has become popular entertainment, but its popularity is also an expression of a need to prove the existence of life beyond death.
We would like to invite proposals for presentations of 30 minutes on the theme of ghost-hunters for the two hostings on 12 October and 16 November. We are interested in presentations which look at ghost-hunting as a historical as well as a contemporary activity and would like to hear from practicing artists as well as from researchers within the fields of anthropology, art history, cultural studies, film studies, history, law, literary studies, parapsychology, psychology etc.
Whether you are proposing an academic paper, a performative talk, a recital or a presentation of your art practice please think of ways of presenting your work beyond the neat framing of Power Point and take us somewhere on the far side of Windows Vista.
Please send a (working) title, an abstract of ca. 300 words, and, if applicable one or two pictures, to ghost.hostings@gmail.com
Abstracts should reach us no later than 12 July 2010.
The GHost project has been running since 2008. It addresses the various roles ghosts play in contemporary culture by bringing artists, writers, curators and researchers together for workshops, so-called ‘hostings’ and exhibitions of moving image and performance art. The hostings take place at the Institute of Germanic & Romance Studies and exhibitions are hosted by St Johns on Bethnal Green (East London).
For more info please see our website: http://www.host-a-ghost.blogspot.com/
Or join the GHost group on Facebook: http://www.facebook.com/inbox/readmessage.php?t=1166662399611&mbox_pos=0#/group.php?gid=117301037117&ref=mf
Artists, please note that there will be a separate call for submissions for the GHost exhibition at St Johns on 17-19 December. We will circulate this soon and will also post it on our website and on facebook as soon as it is ready.
Posted by GHost at 22:25 3 comments: