An evening of interdisciplinary talks and presentations exploring the desire to materialise what is absent through the medium of haunted landscapes.
Venue: The Court Room, First Floor, Senate House South Block, University of London
(An apparition known as 'The Blue Lady' has been reported to haunt the adjoining
Senate room)


This event is free but places are limited - rsvp ghost.hostings@gmail.com to reserve your seat.


HAUNTED LANDSCAPES PROGRAMME:
Sharon Kivland - Reisen
Hostings 6: Absence – Haunted Landscapes, will commence with a screening of three very short films by Sharon Kivland titled, Reisen: The limped waters of mountain lakes, The snow on alpine peaks and The smoke of steam trains. The images in the films are photographs, from a series of works which the artist re-photographed from old postcards. The images also relate to two small pamphlets, entitled Reisen, which refer to the trains, train journeys, railway-lines, stations, station platforms, railway timetables, ticket collectors, and train compartments in the life and work of Sigmund Freud. Each film is subtitled ‘Every year Sigmund Freud went on holiday with his brother, Alexander’.
Sharon Kivland is an artist and writer and 'occasional curator' working in London and France. She holds a Masters in History of art, Goldsmiths College, University of London and a Doctorate from The History of Art Department, University of Reading. She is a researcher at the Centre for Freudian Analysis and Research, London, and a Visiting Fellow at the IGRS, University of London. She has exhibited widely in Europe and North America and is represented by DomoBaal, London, Galerie Bugdahn & Kaimer, Düsseldorf, and Galerie des petits carreaux, Paris. Publications include Freud on Holiday volume III. The Forgetting of a Proper Name co-published by Cube Art Editions, Athens, and information as material, York 2011 and A Case of Hysteria, Book Works, London, 1999.


Mark Fisher and Andy Sharp - Bleak And Solemn... the hauntological landscapes of M.R. James
We present our short film "Bleak And Solemn... the hauntological landscapes of M.R. James" - in which we provide an annotated exploration of real and cinematic locations in two of the author's ghost stories. This will be followed by a short talk discussing the desire to explore horror and ghost film locations. Does exploring such places allow us to enter a ludic and augmented reality? Can this give us access to a forgotten arena of energised play and creative fear, akin to childhood experience. Can we use the intersection of film and location to subvert Williams Burroughs' magical formula: "cut-up reality and the past leaks through"?
By overlaying celluloid and concrete recollections of haunted landscapes, can we create new imaginary films, in which we are the main spectres?
Mark Fisher is the author of Capitalist Realism and the forthcoming Ghosts of my Life: Writings on Depression, Hauntology and Lost Futures. He teaches at the University of East London, Goldsmiths, University of London and the City Literary Institute. His writing regularly appears in Film Quarterly, The Wire, Sight&Sound and on his own weblog, k-punk.
Andy Sharp runs the English Heretic project - an organisation of the imaginative faculty, dedicated to unearthing, researching and speculating upon England's landscapes and tragic figures. Combining literary, audio and visual guides English Heretic have released numerous publications and recordings since 2003 including "The English Heretic Collection 1 and 2", "Wyrd Tales 1 and 2", "Tales Of The New Isis Lodge", "Your passport to the qliphoth" and "Plan for the assassination of Princess Anne". English Heretic also conduct public ceremonies, having recently appeared at "Past, Present and Future" festival at Wysing Arts Centre. Andy Sharp has also talked on a wide range of magical topics, most recently on "The Cult of Ku" at Treadwell's Bookshop. English Heretic have just published their latest book "Wyrd Tales 2", a 140 page illustrated anthology of speculative fiction.


Laura Joyce - Haunted Idylls: Crime Scenes in Ovid's 'Metamorphoses'
Then he hastened with the frightened Philomela into most wild and silent solitudes of an old forest; where, concealed among deep thickets a forbidding old house stood…but even while her agonizing screams implored her sister's and her father's aid, and while she vainly called upon the Gods, he overmastered her with brutal force.
Ovid’s Metamorphoses contains several descriptions of sexual violence, torture, brutality and murder which take place in beautiful, idyllic settings. Often he introduces a sacred grotto, a lush spring, a secret grove, or a dark, impenetrable forest to set a scene. Within these sublime, numinous spaces, he contaminates the landscape with violence and degradation. The spaces continue to be haunted by the violence committed there, as the victims of the crimes do not disappear, but rather metamorphose into elements of the scene itself; from Myrrha’s agonising pregnancy trapped inside a tree, to the terrified Callisto, transformed into a bear, only to be hunted by her son. The quote above is taken from the episode of Tereus and Philomela, and describes the beginning of the brutal campaign of violence done to the girl, set in an ‘old forest’ among ‘deep thickets’, a sure sign that horror will ensue.
My paper will look briefly at the history of the locus amoenus or ‘pleasant place’ in classical poetry, and at the subversive use which Ovid makes of this trope. I will also be guided by Derrida’s essay ‘Hostipitality’ which looks at the etymological links between hostility and hospitality, and the ways in which this impacts on the disruption of the locus amoenus in Ovid. I will also look briefly at Henry Bond’s Lacanian work on crime scene photography, in order to delineate the psychotic nature of Ovid’s haunted spaces.
Laura Joyce is a DPhil student in Creative and Critical Writing at The University of Sussex. Her research is on body horror, necrophilia, murder and sado-masochistic violence, and the haunted spaces that these acts inhabit. Laura is writing a novella as part of her research, from the point of view of a group of murdered women, based on the femicides in Ciudad Juarez. Her first novel, about the killing of six year old beauty queen Jonbenet Ramsey, will be published in June 2012.


Hayley Lock - Spoiling my pussies love time
The ten lectures contained within John Ruskin’s ‘The Ethics of the Dust’ written in 1875 frames a dialogue between the girls of Winnington Hall in Cheshire and an elderly lecturer who references crystallography and scientific knowledge through dreams as a medium for teaching. Referencing Sinbad’s adventures from the tale of a Thousand and one nights, Ruskin describes these haunted landscapes in an effort to educate the young ladies before him about the moralistic complexities embedded in human culture through scientific enquiry, structure and order.
Using the titles of each lecture, I propose to create ten pieces of work, each of which contain a landscape from each chapter. The chapters are: The Valley of Diamonds, The Pyramid Builders, The Crystal Life, The Crystal Orders, Crystal Virtues, Crystal Quarrels, Home Virtues, Crystal Caprice, Crystal Sorrows and The Crystal Rest. I propose to show these works as a Ruskin lecture.
Each landscape will be placed within a recreation of a Claude Glass, a tourist drawing tool or a black glass that Ruskin was said to loathe for its inaccuracies, favouring instead the magnifying glass for fine detailing.
These Claude Glass visions haunted Ruskin in his imaginings through a series of mental breakdowns that occurred firstly in 1871 at a time of great stress with his mother’s death and his close cousins marriage (Ruskin later apologises in a series of letters to his cousin Joan for spoiling his pussies love time) and they continue to his death in 1900. Ruskin’s illnesses have since been recognised to fall at a point of loss when these dark imaginings muddled truth and reality with confusion and sorrow.
Ruskin attempted to throw away these black glasses into Coniston Water and as well as on his travels to Europe but on each occasion they were returned by Joan.
Hayley Lock studied at Goldsmith’s College, London and currently lives and works in Suffolk and Cambridge. Her practice straddles fact and fiction, truth and the fake. Weaving new narratives of history and myth through a complicated and sometimes mysterious tale of heartache, lust and delusional thinking, Lock allows her practice to accumulate, take unfathomable journeys and elicit deceit to create part encrypted biography and part parallel histories through drawing, collage, sculpture and sound. Previous exhibitions include These Living Walls of Jet, Ceri hand Gallery, London; Future 50, Project Space Leeds and To Taste Molten Diamonds, Backlit Studios, Nottingham. In 2011 and 2012 Lock reinvented new histories in historic places with her project (Now that would be) Telling which travelled to Ickworth House, Suffolk, Brantwood House, Cumbria, Dr Johnsons House, London, A La Ronde, Devon and Caddington Hall in London. 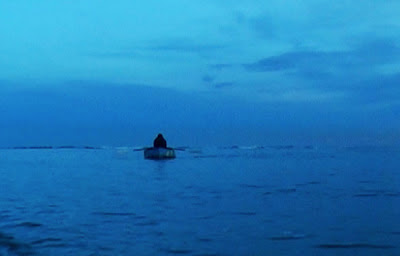 These twelve international artists responded GHost's call for short films on the theme of “The Haunted Sea”. Their films were first screened on the final weekend of the Folkestone Triennial as part of GHosts activities during a three month residency at the B&B project Space


Bring a blanket and/or cushions and settle yourself down to a night of haunting images and tasty treats.
1

with
food for the living from
the Gutclub

Take a wander around this cavernous gallery and marvel at the work of the Mesolithic Pop artists.

With Thanks to the Workspace Group

Posted by Sarah Sparkes at 01:04 No comments: