GHost has been invited to haunt the B&B Space in 14 Tontine Street for the duration of the Folkestone Triennial (25 June – 25 September). Our project GHost CLHub has manifested in a corner of the B&B and will open its doors to the public on 25 June. Over the three months of the Triennial GHost CLHub will explore  the hidden narratives of ‘hauntings’ emanating from Folkestone and the Shepway area and our corner in the B&B will grow from the initial exhibition into an archive of artworks, artefacts, documents, films, stories and other entities.
For the opening of GHost CLHub we will be showing haunted artworks by Miyuki Kasahara, Calum F. Kerr, Domingo Martínez Rosario, Sarah Sparkes, Ricarda Vidal and Cathy Ward.
26 June to 1st July: GHost at the Kent Cultural Baton
Between 26 June and 1st July we will install temporary headquarters in the Cultural Baton – find us in Folkestone Harbour on the 26th and in the Leas from 28 June to 1st July.  Visitors can engage with and contribute to the ghostly archive documenting uncanny tales from the Shepway locale. On display will be films by  GHost artists, publications, artefacts and illustrations responding to local ghost stories.  There will also be interactive information about the project.
Visitors will also have the chance to acquire membership of  "GHost CLHub", take away GHostly souvenirs as well as leaving some ghostly keepsake behind for the archive.
Opening times:
Sunday, 26 June, 4.30 – 7.30pm; EVENT: 8pm, Raising a euphoric ghost
Tuesday, 27 June - Friday, 1st July, 4.30pm – 7.00pm
(Monday closed)
Contact: ghost.hosting@gmail.com
More info for the Kent Cultural Baton: http://kentculturalbaton.com/blog/?p=249
More info about B&B Space: http://gogowhippet.com/wordpress/bandb/about/

GHost has been active in Folkestone, manifesting our GHost CLHub in a dark corner of the B&B project space in preparation for the opening of the Folkestone Triennial on June 25th.

Posted by Sarah Sparkes at 11:56 No comments: 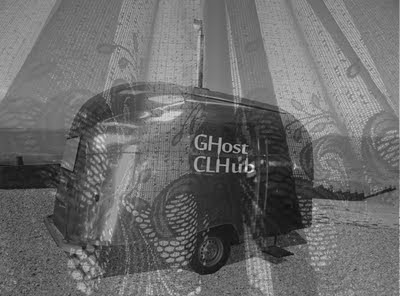 As part of our three month residency in Folkestone for the Triennial Fringe, GHost will install temporary headquarters in the Cultural Baton.  Visitors can engage with and contribute to a ghostly archive documenting uncanny tales from the Shepway locale. On display will be films by  GHost artists, publications, artefacts and illustrations responding to local ghost stories.  There will also be interactive information about the project. Visitors will also have the chance to acquire membership of  "GHost CLHub", take away GHostly souvenirs as well as leaving some ghostly keepsake behind for the archive.
A euphoric ghost raising event on Sunday 26 June will mark the beginning of our residence at the Baton.

The Kent Cultural Baton is a unique, original artwork designed by artist Nicole Mollett, "It is a mobile creative workspace that at each visit chapters the sights and sounds of its location".  Read more about GHost at the Baton here

On 1st of May we took up residency in the B&B project space, 14 Tontine Street, where as part of the Vernacular Events Program we are installing our project GHost CLHub.  GHost CLHub explores the hidden narratives of ‘hauntings’ emanating from Shepway.  A growing archive will document our findings over the five months and will be contributed to by visiting and local artists, writers, researchers and others. We’ll also host a series of events including film screenings and performances in local venues. A call for films on the theme of the ‘Haunted Sea’ is currently being advertised (deadline for submissions 14 July). In the final week of the Triennial (21 September) there will be a ghost story competition at the British Lion.

GHost explores the various roles ghosts play in contemporary culture by bringing artists, writers, curators, researchers and others together. GHost hosts exhibitions, performance events and workshops, so-called ‘hostings’. Venues have included the atmospheric church of St John on Bethnal Green, a John Soanes church in East London, the haunted Senate rooms at University of London and a video booth at the London Art Fair. We’re looking forward to haunting Folkestone throughout the Triennial.